Andrew Mearns was the Minister of the Congregational Church AKA the Salem Chapel in Quoiting Square Great Marlow (now known as Christ Church) from 1863 to 1866.

He was from Ayrshire in Scotland and a member of the General Council of the University Of Glasgow. Andrew started out in life as a teacher before he followed his vocation into the church.

The first thing Andrew did when he took over from Thomas Styles was to set about trying to clear the church's debts accrued following a programme of repairs and alterations that had seen the church closed for some weeks. This he apparently did very quickly. He was also credited with healing divisions  between church members caused by the with some unpopular marriage of former minister Thomas Styles. You can read more about this dispute in my post on Thomas Styles published in March 2021.

In 1865 Andrew married at Maidenhead Annie Knapp from that town. His uncle Revd P Mearns helped conduct the ceremony.

Shortly after the marriage Andrew began advertising for live in pupils to come to him for a "physical, mental, and moral education". Parents were reassured that each boy would be carefully attended- and have his own bed! There were some very poor quality little boarding schools about with pupils crammed in and barely educated or fed so such reassurance was more necessary than you might think.

Andrew pops up all over the place as an invited giver of sermons, he was clearly talented in that respect. So much so that he was headhunted away from Marlow by Chelsea Congregational Church in Markham Square London. He had given some sermons there while the church's usual minister was away. Andrew made so great an impression on the congregation that when their minister died suddenly they knew exactly who they wanted to replace him. Two men were dispatched to Marlow to see if Andrew might be open to the idea of moving on. He said that he liked Marlow but couldn't give up the opportunity to work in so large and needy a parish as was being offered to him so Marlow lost him. But Marlow's loss turned out to be many people's gain, as you will see below.

Andrew resigned from the Chelsea church in the 1870s in order to become the secretary of the London Congregational Union, a post he occupied for over 30 years.

Whilst in the post Andrew wrote one of the most influential and important works on the subject of London's suffering poor in the 1800s- The Bitter Cry of Outcast London (1885). Andrew's inquiry into and exposure of the depth of misery experienced by the poor inspired many, many people of all denominations to partake in relief efforts. The profits of the sale of the work went to the London Congregational Union for its work in that field. It's a sad read but well worth it if you are interested in history. It is now in the public domain and can be read for free at https://en.m.wikisource.org/wiki/The_bitter_cry_of_outcast_London

I was already familiar with this work but no idea the author of it had once lived in Marlow.

Andrew published it anonymously. Another minister William Barton later claimed that he was the author so Andrew had to take action to correct that. Much of his writing was quoted by the sensationalist magazine The Pall Mall Gazette. Andrew was worried this would cause some people to dismiss the work as an exaggerated semi fiction- the magazine was known for such things. But he needn't have worried. Once his name, which carried weight, was known to be attached to the work the right people- those not content to read about suffering without trying to alleviate it- knew it had been compiled by a genuine man.

As I said above a great many people were moved to help London's slum dwellers because of his writing, as well as his speeches.

Andrew and his wife were also instrumental in setting up a convalescent home in East Cliff, Folkstone for needy Londoners. The home was known colloquially as Mrs Mearn's Home. They rightly reasoned that recovering from serious illnesses in homes with no ventilation, overcrowding and in some cases not even any bed to sleep in would be impossible. The sea air was believed to aid recovery and lift spirits too. By 1895 over 3,000 people had passed through the doors of the home.

Andrew remained in contact with Marlow and advised his former church there when they needed to choose a new Minister. Another sign of his continued place in the affections of his former flock was the fact that he was asked to travel up to Reading to perform the marriage ceremony of William Wright of Marlow to Ellen Silver of Reading in 1874.

Researched and written by Charlotte Day.

Take a look at the Church Related option on the menu for similar content. There is also a Graves option to find more grave photos and a Person Index.

The Congregationalist Volume 10 edited by Robert William Dale and James Guiness Rogers, 1881. Digitized by Google and accessed by me March 2021.

West Middlesex Advertiser and Farm Journal 1866. Copy held in the British Library Archive and accessed by me via the BNA March 2021.

Chelsea In The Olden And Present Times by George Bryan. 1869.

A Portrait of Christ Church 1693-2003 by Jean Ashford. Thank you to Martin Ashford for a copy of this book.

The Story of Christ Church, Quoiting Square Marlow 1693 - 1986 by Arthur Macarthur. Thank you to Martin Ashford for giving my sister and I a copy of this book.

©Marlow Ancestors. You are very welcome to reuse this research if you credit this blog and link here so that the sources listed above do not lose credit for the information they provided.

And here for another post on some other local heroes.

**DO YOU HAVE AN ANCESTRAL CONNECTION TO CHRIST CHURCH IN MARLOW? IF SO WHY NOT COMMEMORATE YOUR ANCESTOR BY SUPPORTING THE CHRIST CHURCH PATH OF LIFE FUNDRAISING EFFORTS - SEE   Here FOR MORE INFORMATION**

A post about Revd George Edwards of Christ Church will be coming soon too as will some research on the church's war dead. 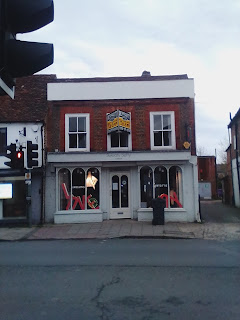